Experience the utmost in comfort and style with the Winsome Wood Satori Saddle Seat Counter Stool. This 24" counter stool has a unique saddle-shaped seat, which is extra-long, rectangular in shape, and curved in the middle for true comfort. Featuring a crossbar on all four sides, for stability and comfort making this stool not only attractive but also very functional. Pull up a stool to your kitchen counter or island and create an instant seating area ideal for meals or homework. Crafted from durable beech wood, this stool is finished in a rich walnut and has a raw style that will blend easily with any most decor. The Winsome Satori collection is available in multiple finishes and like most Winsome stools it is also available in both bar and counter height. This counter stool is packed and shipped, single, in 1 box, that includes the hardware necessary for assembling. Replacement part request can be submitted directly to the manufacturer within 60 days from date of purchase.
Stool assembled size is 17.48"W x 14.47"D x 24"H
Seat Dimension is 17.50"W x 9"D. Static Weight is 220 Lbs.
Made from solid wood in walnut finish.
Seat height is 24"
Assembly is required
Ships in 1 box

I bought two of these to go with two similar, inexpensive stools from Target that I already had. My rating, therefore, is based on similarly priced stools--though these stools on sale were slightly cheaper--and not compared to hand-crafted artisan stools or anything that one would expect to pay several times more to purchase.Fit and finish on these stools was not bad other than one rough patch on one of the two that I got (see the first picture). The biggest negatives in this category are that the seat of the stools is not a solid plank but thinner and shorter strips finger jointed together and that this isn't really walnut or even a walnut finish (see the second picture). The finish is more of a dull, dark cherry. Neither one of these issues takes away from the utility of the stools, but both are worth noting. The other two pictures show a Winsome stool next to one I got from Target. By comparison, it is easy to see how the winsome finish is more cherry than walnut.Assembly was a bigger problem. The included hardware, as other reviewers have mentioned, is not good quality. That wasn't an issue with any of the shorter screws, but the hex heads on two of the longer screws stripped out before I even had them screwed in completely. I would recommend replacing the four longer screws with something from your nearby hardware store if you want to avoid headache and hassle. These stools took far longer to assemble than those I bought at Target because the hardware had to be babied and I had to replace screws.Overall, if you are looking for something that doesn't need to be flawless and you have extra harware and patience for assemby, these are not a bad choice. 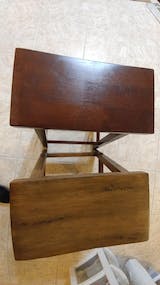 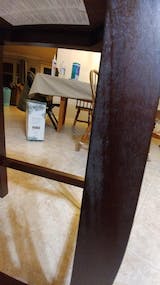 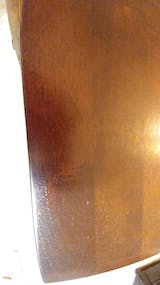 I gave my son and his girlfriend entertainment one evening by assembling this. I didnt notice the red dots on the legs and was complianing that it would have been nice if it were better labeled when suddenly I realized it was labeled& I had assembled it incorrectly. It also requires some pushing to get the legs to fit (it is meant to have a curve to the legs) so they got a kick out of my faces. Anyhow, it is definitely sturdy-I use it to put lotion on my feet when dressing after showering and it holds up my plus size body so I am pleased. No more falling over trying to put my socks on.

These are great little stools and are so sturdy! When we were shopping for stools for our breakfast bar extending from our kitchen island, I was dumbfounded when I saw the going rate for counter height stools! When we found these ones, I thought for sure they had to be cheaply made, but the reviews were good and we gave them a shot especially considering that the total amount we would spend on these stools is what one of any other brand would have cost. My husband was less than thrilled that he had to assemble six of these, but after a he had done a few he kinda got in a stool making groove. He did glue the joints prior to screwing them in to be on the safe side since we have company over often and wanted to give it a little extra holding reinforcement. They've held up great, look awesome, and guests have complimented the style of them. The sway top is actually quite comfortable too and the thin design makes them easily fit right under the counter overhang without sticking out much at all. I'm very glad we found these and happy with them so far.